This is Part 2 of the “Moku Cloud Compile with MathWorks HDL Coder” tutorial, Part 1 can be found here. In part 2, we will use MathWorks’ Simulink to build and deploy a two-channel Schmitt trigger on Moku:Pro. The general workflow between the MATLAB script approach and Simulink model approach is similar, but Simulink provides additional first-party DSP and test blocks that are ready to use. The block diagram-based design method provides a more intuitive way to construct a DSP workflow, especially for more complicated systems. In this tutorial, we will construct the first channel via a hybrid MATLAB-Simulink design and the second channel with the Simulink library.

Liquid Instruments’ Moku Cloud Compile (MCC) tool enables users to design custom instruments for implementation on Moku platforms. Compared to CPU and application-specific integrated circuit (ASIC) based DSP approaches, FPGAs provide ASIC-level input-to-output latency while being software-defined and reprogrammable like a CPU. FPGA programming is typically done with hardware description language (HDL). The learning curve for HDL coding can be steep compared to software programming languages, but there are a few tools available to convert scripts in other programming languages to HDL. We covered how to use MathWorks HDL coder to convert a MATLAB script into HDL code for implementation on a Moku:Pro in Part I of the tutorial, in this Part II we will demonstrate how to generate HDL code from a Simulink model.

Simulink is a graphical-based modeling tool developed by MathWorks. The block diagram-based design philosophy streamlines the process of translating a hand-drawn digital signal processing (DSP) system into a computer-based model. The virtual test and measurement instruments, such as waveform generators and oscilloscopes, provide a more intuitive way to construct the testbench and validate the DSP model. In addition, users have the option to use Simulink to build a fixed-point system from the ground up. Some of the logic operations are easier to implement with MATLAB functions, in this case users can add MATLAB function blocks into their design. For more complicated systems, utilizing both tools could significantly streamline the design process. 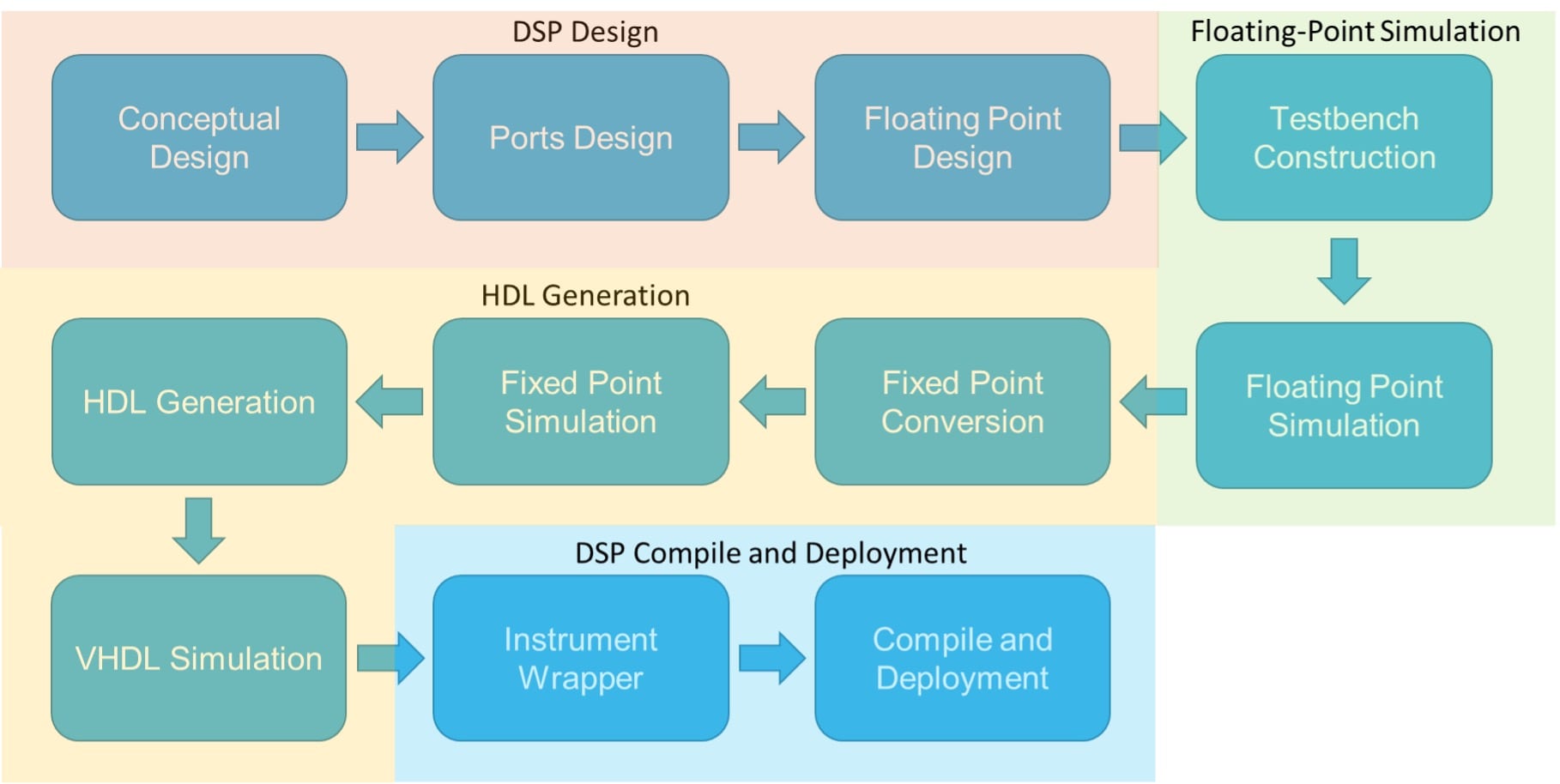 Design and construct the DSP

The first step in creating our model is to adjust the Simulink template to fit our DSP design. As our design is a two-channel system, we will only need the InputA, InputB, OutputA, and OutputB ports. 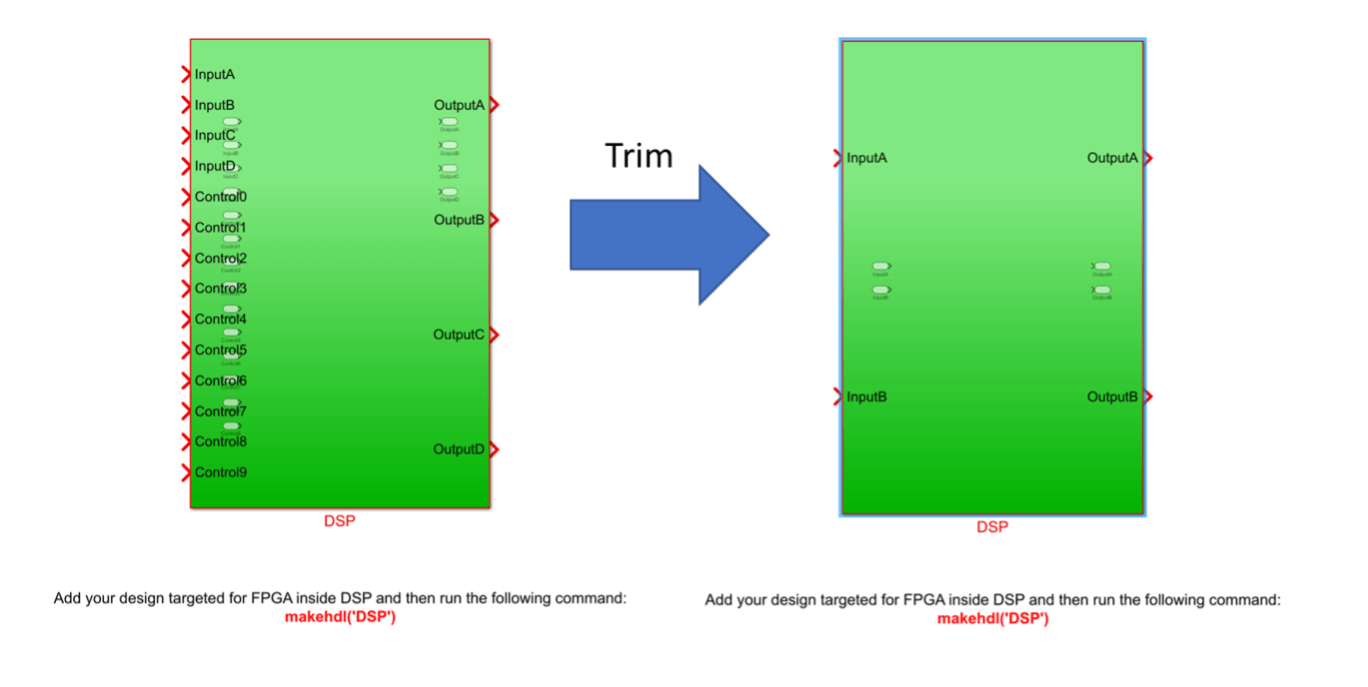 Simulink building blocks can be found in the “Library Browser” under the simulation tab. The search function is the best way to find the desired element. Please note that not all Simulink blocks support HDL code generation. We recommend only using blocks under the “HDL Coder” or “HDL Support” catalog for everything within the DSP subsystem.

Figure 3: Simulink building blocks can be found via the Library Browser.

For the second channel, we will use Simulink’s “Relay” block to perform the Schmitt trigger logic. We placed the relay block between InputB and OutputB, then double-clicked the “Relay” block to change the switch on and off thresholds to floor(2^15/10), and – floor(2^15/10), respectively. In the “Signal Attributes” tab, set the signal output to fixdt(1, 16,0) to match the output.

Figure 5: The “Relay” block was set to perform the same Schmitt trigger logic as the first channel.

Simulink has a built-in signal generator, oscilloscope, and other common test and measurement equipment blocks. This allows us to design the testbench in a more intuitive way. Please note the building blocks outside of the DSP system do not need to be supported by HDL Coder, as they will be used for simulation only.

To construct the testbench, we used a “Signal Generator” block to produce the same signal we used for the testbench in Part I. We rescaled and converted the signal from the generator to match the 16-bit signed input for our system. Before feeding the signal into the Inputs, an additional “Convert” block was added to convert the floating-point numbers to fixed-point. Then, we fed the generator signal, OuputA, and OutputB into the oscilloscope to observe the system response.

Once the system is constructed, we run the simulation and verify the output. We observed the output signal was as expected. 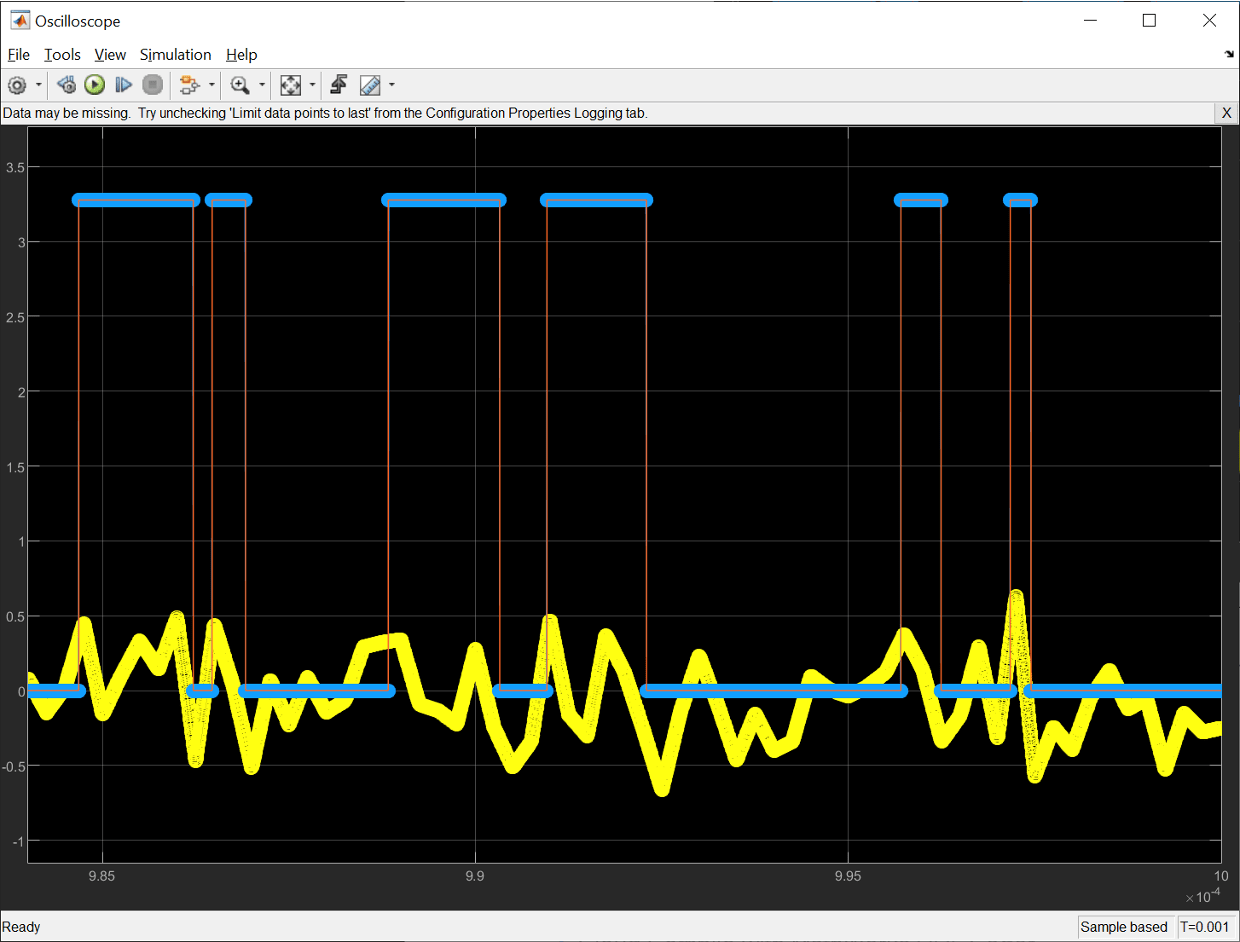 Figure 7: The output of the DSP subsystem on the oscilloscope.

Before generating the VHDL code for our DSP subsystem, we will need to convert the floating-point MATLAB function block to a fixed-point function block. We achieve this using MathWorks’ Fixed-Point Tool in the “Apps” tab, with “Iterative Fixed-Point Conversion” method. Please note that if we build the Simulink model with fixed-point DSP from the beginning, we do not have to run the fixed-point conversion. 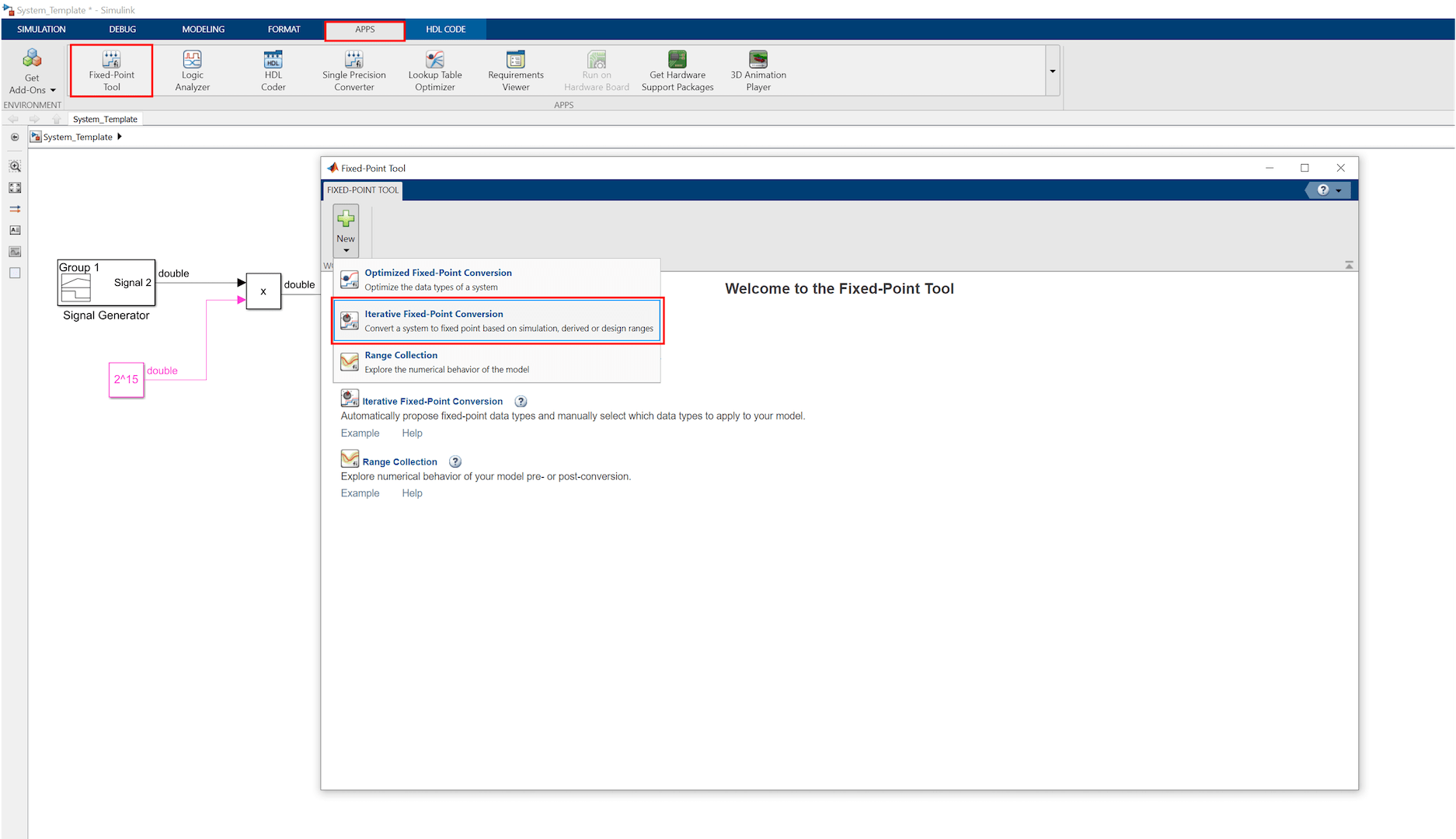 Figure 8: Iterative Fixed-Point Conversion can be initiated via the Simulink Apps tab.

Next, we selected the MATLAB function as the target and initiated the conversion process by clicking the “Collect Ranges” button. Simulink uses the testbech data points as the reference to convert the model. 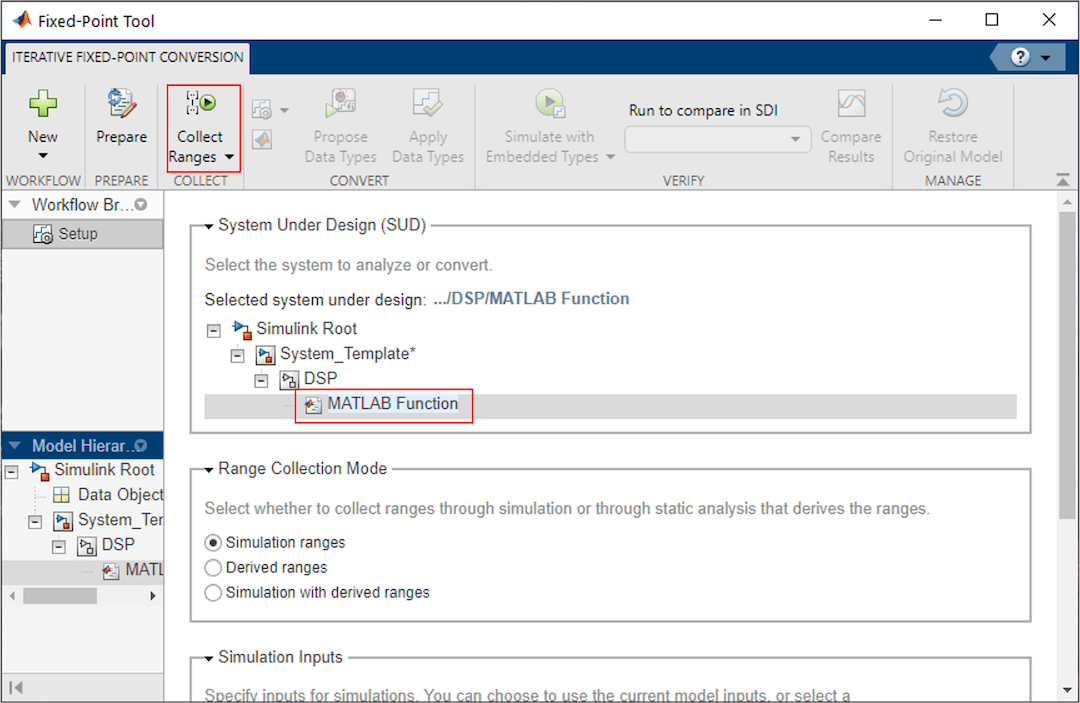 Figure 9: The MATLAB function was selected as the “System Under Design”. 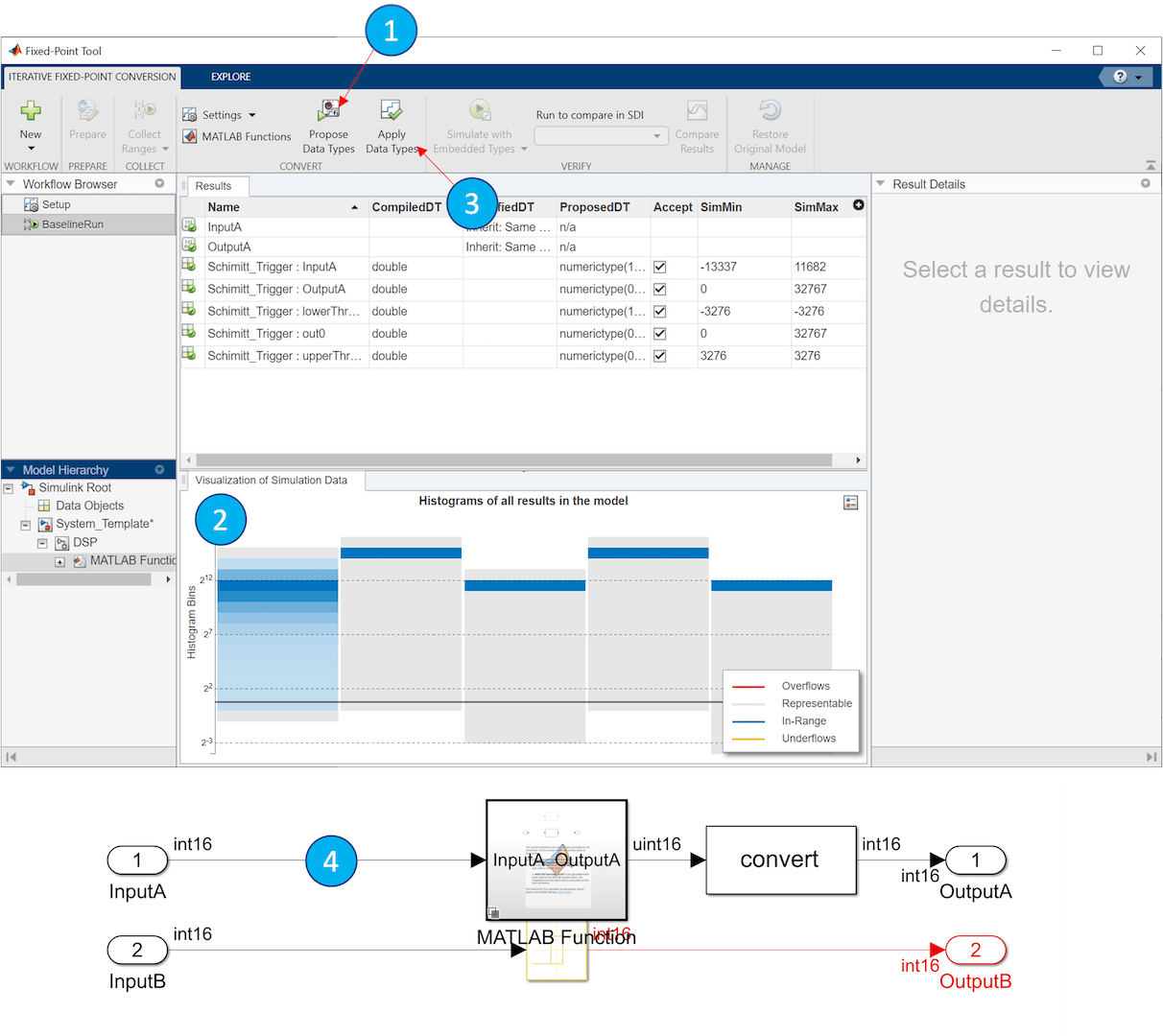 Figure 10: (1) Propose the signal precision based on the testbench data; (2) Observe the signal range with the histograms; (3) Proceed to convert the model to fixed-point design. (4) Delete the first “convert” block.

After the fixed-point conversion, the first “Convert” block needs to be removed; as the new “MATLAB Function” block takes in fixed-point numbers instead of floating/double.

After the models have been converted, it is important to run another round of simulation to make sure the behaviors and precision loss are as expected.

HDL code can be generated by clicking the “Generate HDL Code” button under the HDL Code tab. HDL Coder generation settings are already preconfigured in the Simulink template, therefore we do not need to adjust settings here.

VHDL testbench file can be generated by clicking the “Generate Testbench” button under the HDL Code app. The verification step is identical to the MATLAB example.

Please note even with the “Minimize clock enables” option selected, sometimes HDL Coder still generates VHDL code with clock_enable and ce_out ports (like in this tutorial). We will connect the clock_enable with a constant high signal and leave the ce_out ports open if these ports are created during the VHDL conversion process.

Compiling and deploying the instrument

We also verified the Schmitt trigger in Channel B, which was designed using the Simulink trigger block, and observed the same behavior.

Finally we compared the two output channels together and can verify that they switch to high and low at the same point. 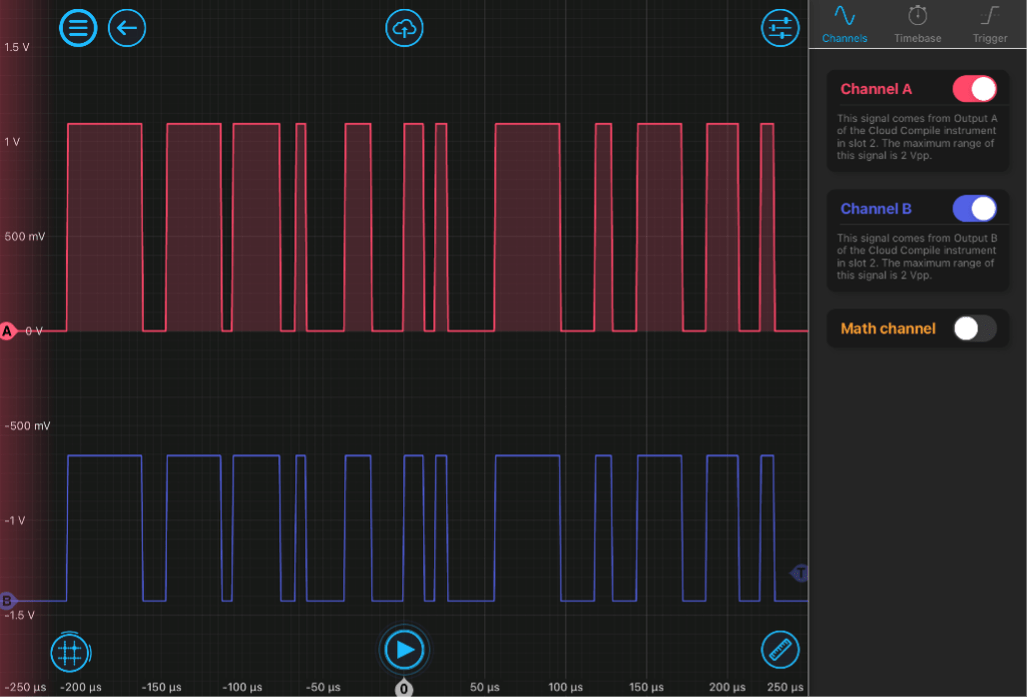 Figure 15: The Schmitt trigger designed using the MATLAB function block and the trigger block have the same behaviors.

In this second part of the tutorial, we covered how to utilize MathWorks’ Simulink and HDL Coder to build, validate, and deploy a DSP model on Moku:Pro. Compared to MATLAB only approach, Simulink gives you the option to design the DSP via its DSP library and build the model with the fixed-point model from the ground up. It is recommended for building complicated DSP systems.

The source code for this project can be downloaded with this link.