At the XLIM Research Institute, researchers in the Gas-Phase Photonic and Microwave Materials (GPPMM) group are working on experiments in the area of hollow-core photonic crystal fibers (HC-PCF). Laser stabilization is essential to their experiments and here they present the stabilization done on the D2 transition of rubidium 85 vapor obtained by saturated absorption. Moku:Pro, with its 4 analog inputs and outputs and multiple accessible software-defined instruments, provides a versatile tool to enable this with just a single device.

To observe rubidium sub-Doppler transparencies, an optical and electrical setup is composed of a commercial rubidium (Rb) cell acting as a saturated absorption spectroscopy (SAS) module which generates the absorption signal. A tunable laser around 780nm is split between an electro-optic modulator (EOM) and wavelength meter. In order to stabilize the laser, control the EOM and measure the Allan variance, several different instruments are required. Moku:Pro’s Multi-Instrument Mode allows XLIM researchers to configure multiple instruments simultaneously, in this case acting as a waveform generator, a lock-in amplifier, a double PID controller and data acquisition for Allan variance. This is implemented using the Waveform Generator, Laser Lock Box and Phasemeter instruments. The Waveform Generator modulates the probe laser beam’s optical frequency through Moku:Pro’s first output (named “Sort 1” here due to French language setting) which is linked to the electro-optic modulator. This function generator is also linked to the second entry of the Laser Lock Box which assembles both lock-in amplifier and PID controller for signal mixing, demodulation and laser locking applications. The Laser Lock Box is also linked to the photodiode signal (SAS module) with sub-Doppler transparencies from the probe beam coming out of the Rb cell (Moku:Pro’s first input, “Ent 1”). Both outputs channels of the Laser Lock Box (A and B) will be used for laser servo control (“Sort 2”) and scanning (“Sort 3”). Then, the Phasemeter instrument is used as an acquisition tool for photodiode DC signal monitoring of the locked laser and for measuring Allan variance, which is representative of the stabilization quality.

The first module that is used is a waveform generator, shown in Figure 2, to modulate the probe laser beam at 500 kHz frequency. If needed, a second waveform generator can be used on Output B of the instrument (see Figure 1, bottom) with a possible in-phase signal related to Output A. 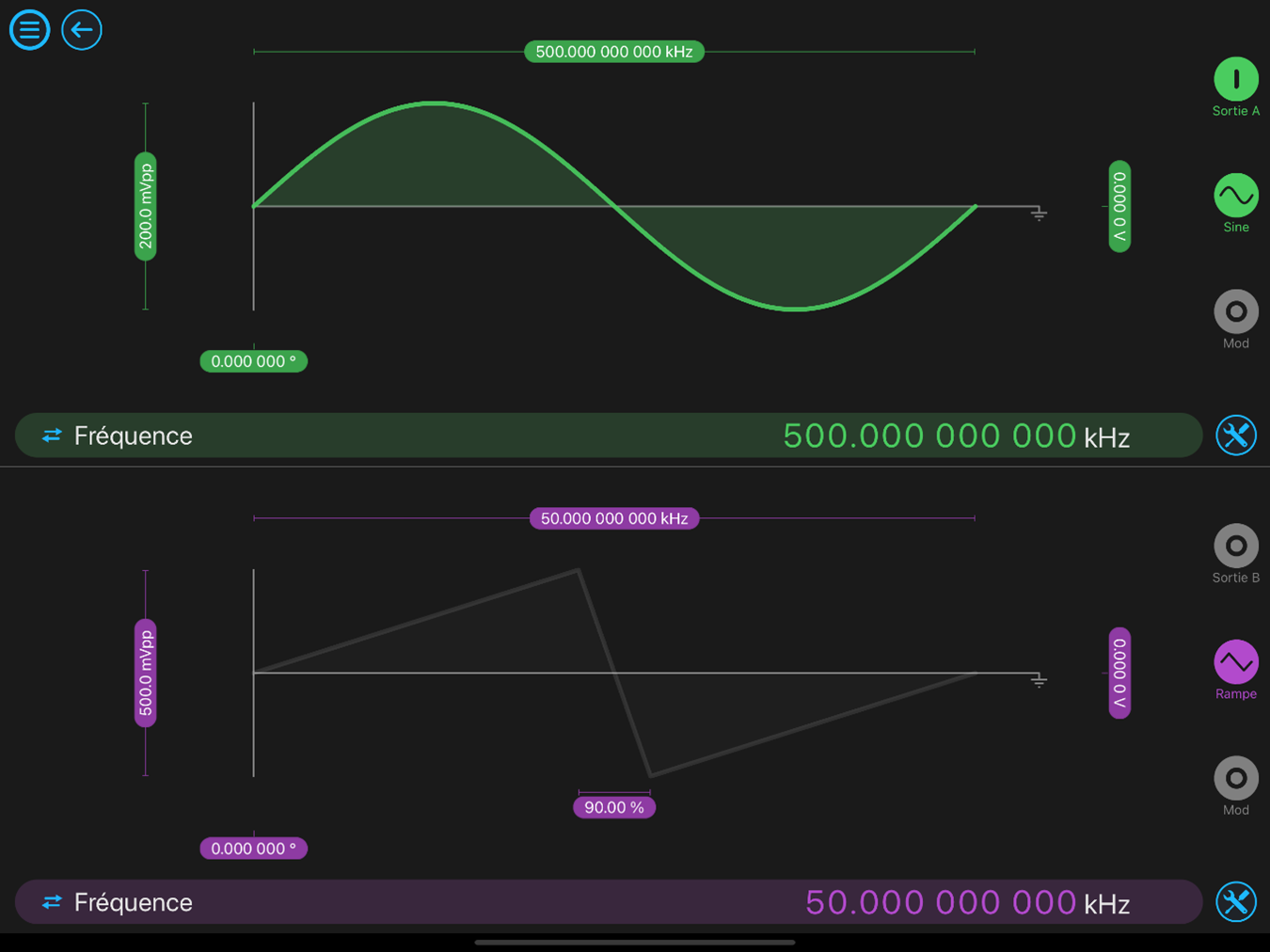 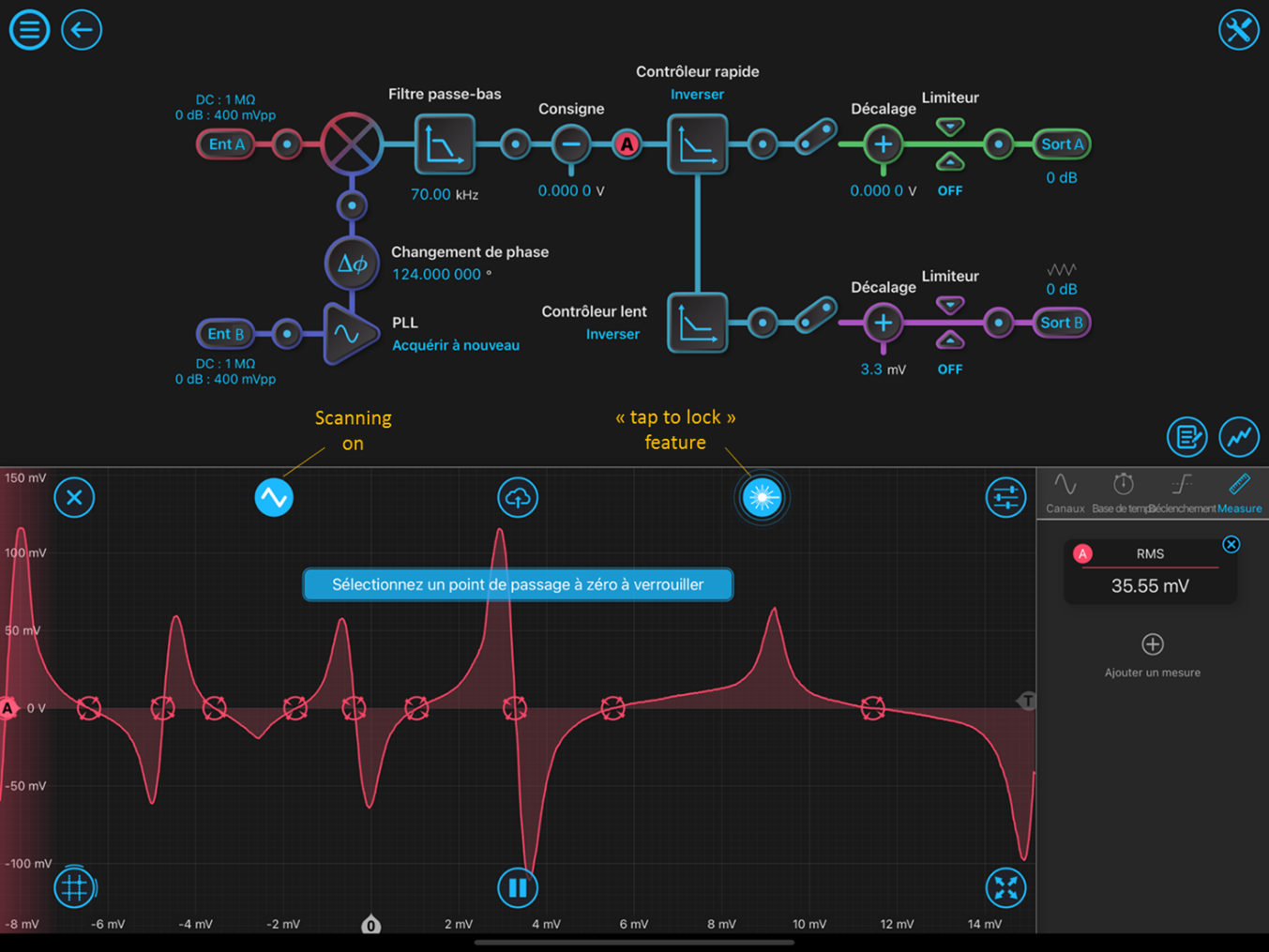 Figure 3: Block diagram of the Laser Lock Box as well as integrated oscilloscope for signal monitoring. Each electronic component can be set by tapping on the iPad screen. A tab (not shown) is available for scanning parameters, as well as an external oscillator.

Firstly, we show the unlocked laser DC signal in Figure 4 with its measured RMS of ~13 mV. In order to lock on sub-Doppler features, we set the laser scan at 35 Hz, 14 mV with Moku:Pro through Output B (“Sort B” in Figure 3) of the Laser Lock Box which is routed to the Output 3 physical connector (“Sort 3” in Figure 1). The offset of the scan is set directly on the diode controller. We set a phase-locked loop (PLL) on Input B and demodulate the signal with a low-pass Butterworth filter of order 2 whose cutoff frequency is set at 70 kHz. We obtain an error signal (red curve in Figure 3) that we use to lock our laser with the help of the “tap-to-lock” icon available on Moku:Pro (annotated in Figure 3). The lock is set by clicking on the red circle on the oscilloscope. Figure 4: PID fast controller with default parameters. The laser DC signal is shown in red, directly coming from the photodiode.

The locked signal is then sent to the current control of the laser through the fast PID controller (Output A in Figure 3 and physical connector Sort 3 in Figure 1) and is optimized with the PID parameters shown in Figure 5. Figure 5: PID fast controller with optimized parameters. The locked DC signal is represented in red, directly coming from the photodiode.

We set different parameters such as the proportional gain, and the integrator (top part of Figure 5). A double integrator, a differentiator, and a saturation for integration and derivation can also be used if needed. Optimization of those parameters is achieved by decreasing the RMS of the DC signal that is measured on the bottom part of Figures 4 and 5. Indeed, proportional gain is increased until the signal starts to oscillate and then set just before. The same operation is done for the integrator, and then the differentiator frequency if needed. We repeat this cycle until achieving good performance in order to optimize the “short term” lock. Once optimization is complete and the laser is locked, we’re ready to characterize the laser stability by measuring its Allan deviation.

To measure the Allan variance, we can simply use the Phasemeter instrument for direct observation of the Allan Variance of the stabilized laser. These measurements can be saved to the iPad, USB or cloud for analysis. However, the saved data correspond to the raw signal frequency, phase and amplitude, therefore the Allan Variance will need to be retrieved. This can also be done using Python code as explained in this application note, Measuring Allan deviation: A guide to Allan deviation with Moku:Lab’s Phasemeter.

With a user-friendly interface, Moku:Pro is a versatile tool allowing us to measure, analyze and use signals. Combining Waveform Generator, Laser Lock Box and Phasemeter instruments together with the Multi-instrument Mode enabled us to resolve here the sub-Doppler spectrum of rubidium vapor around 780 nm with no other device than Moku:Pro, and then lock the laser frequency on the D2 Rb transition. Case Studies
SRS microscopy experiments with Moku:Pro at the University of Washington